They say a Leopard doesn't change its spots; Here at VAD, we do like to give the benefit of the doubt and as we have possibly spoken to him more than most, we thought 2017 / 2018 might be the change for Dominik Bahn, but how wrong we were. We shouldn't really be shocked, it hasn't taken long for us to be contacted by people that have placed orders, paid for (some in full) and not received their goods from Dominik Bahn and his abysmal company Carbostuff Engineering. This company and owner are an absolute atrocity and it is about time something was done. What he is doing is not only disgusting but it’s a criminal act; he has already spent time in prison for theft, and that last time we checked obtaining money by deception is theft - I guess once a criminal always criminal as far as Dominik Bahn is concerned.

We have been contacted recently by Robert Schärer from Switzerland who sent Carbostuff €2,200 Euro for Honda parts, which he has never received. After chasing Dominik Bahn repeatedly, he was given the usual Carbostuff run-around of lies a deceit. 12 months without the ordered parts and still no refund, and now Robert has been cut off and ignored. This is the usual Carbostuff way of doing business - obtain money by any means, then deceive. Unfortunately, it was too late for Robert when he came across our blog posts of our own dealings with Carbostuff, as he had already handed over his money and is yet to receive nothing.

We have also been speaking to a company from Australia, who wishes to keep his name anonymous at the moment whilst he figures out his next move, which could possibly be the legal route, what we can say is it was for Audi R8 LMS Ultra parts, deposit paid $11,000 AUD or €7,000 Euro and hasn't received the parts, or a refund, and as per usual is now being ignored with the usual Carbostuff garbage.

We have had another customer contact us today, Mihai Zamfir, who has paid €3,800 Euro for parts to be made and delivered by the 20th of January. He had an email after email of excuses, if any past excuses are to go by, they they could include: Father is ill, Daughter has passed away, delivery has been sent to another country, my guys in the warehouse are just packing it up - every excuse just stinks of bullshit, but shows what type of person he is to use a daughters death as an excuse, which we have been reliably informed isn't true.

So how is he getting all his business? Social media is one route as well as advertising on free Motorsport parts websites. We have been told he advertises on the following websites: Racingpal.co.uk

We can see that he is still very active supplying some of the GTR community, which is a concern. One name that stands out is Total Car Concepts of the Netherlands; it seems they ordered some GTR GT3 parts, which as we understand were delivered to them personally by Dominik Bahn. The question we keep asking is why would TCC get parts when everyone else who has ordered parts is being scammed and deceived?

One of the possible reasons is that at the moment Carbostuff Engineering has a terrible reputation within the GTR community. He has a bad name across all of the GTR forums as this is where he has done the most damage, with huge sums of money still not refunded. We think that by him supplying a company like Total Car Concepts, who are building a track based GT3 time attack car, masks the issue that he is a fraud - how can he possibly be a fraud when he has delivered parts to TCC. He also has the added bonus of TCC thanking him as a supplier / sponsor that gives him credence within the market place, especially to the GTR owners that are not part of the GTR network, or belong to any club. So Carbostuff Engineering getting promoted as a supplier / sponsor is a kick in the teeth to the people who have been scammed by this criminal.

We have put together a small selection of customers that have been scammed, and it dates back to the end of 2014, which is amazing as this is when he got out of Prison for his last escapades. It’s extremely frustrating reading, especially as this guy is taking money by deception for his own living, and gives very little if anything in return.

Along with €13,050 within the last 2 months, that we have already mentioned above.

"So how does he constantly obtain money by deception"

After talking to everyone it’s the same story - he is very clever at what he does much like other criminals of deception; when you speak to him, he has the charm, he knows the right things to say and he fools people into thinking he has what you want. We already know he has a selection of parts, who makes them and where they are manufactured in Poland. We also know that most people who deal with him regarding large sums of money get a few parts delivered first; like he did with Terry Horne, who ordered over £100,000 worth of GTR parts, to be supplied little bits and pieces, but then was asked to send more money for the larger more costly parts to be manufactured. The reason alarms bells don’t ring is that every company that manufacture carbon fibre parts want payment upfront, so it’s nothing unusual - its expensive and it is the industry standard to make payment before goods are produced, hence the reason he is sent large sums of money - unfortunately with carbon fibre, if you don’t pay, you can’t play. 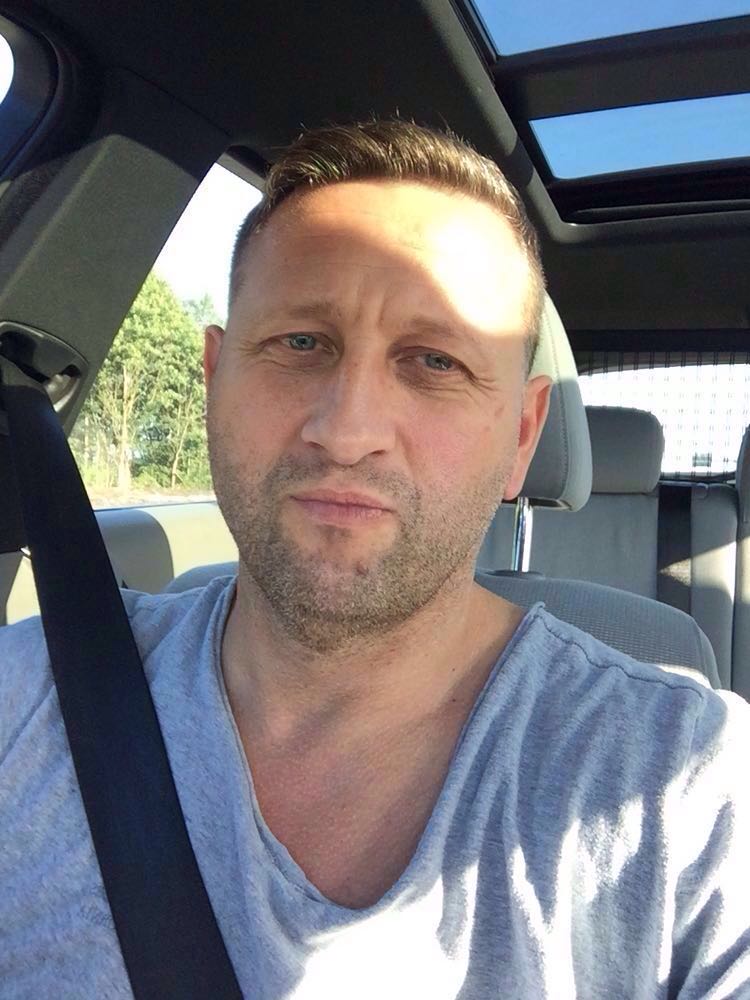 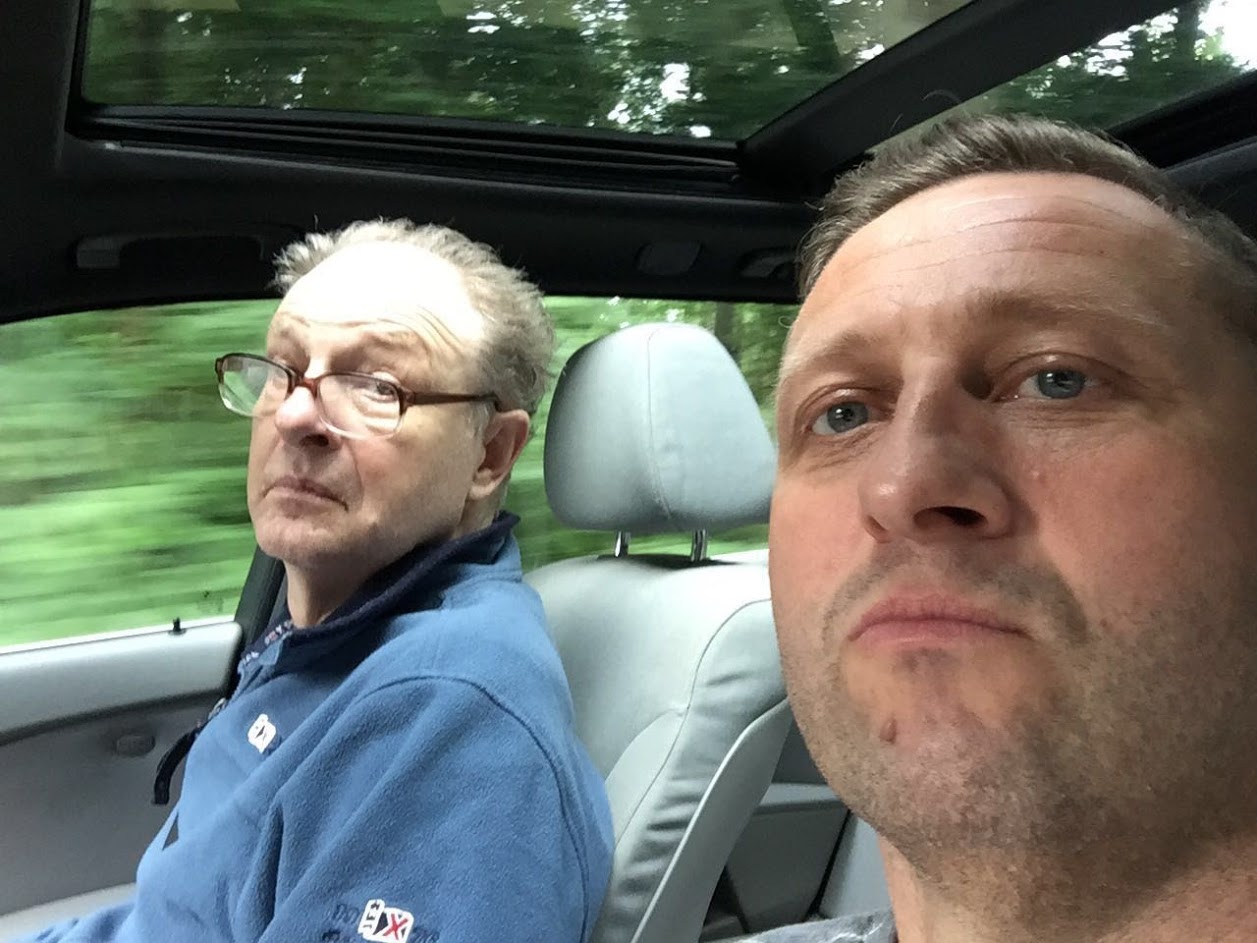 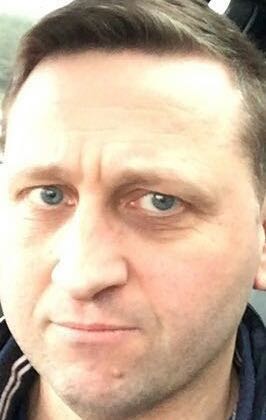 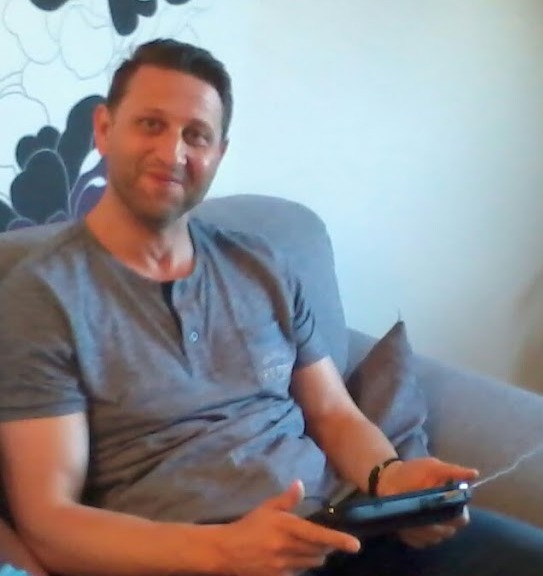 We also want to make people aware that this guy is not just preying on just GTR related parts and customers, he is more widespread. It is carbon parts in general, as well as engine parts, engines and wheels. In fact, anything to do with Motorsport - as Steven Bolton found out, when he sent €14,000 Euro for a Mercedes 190E race engine Dominik Bahn had advertised for sale. Since 2016, Steven has received no engine or any refund, and as the guy is based in New Zealand, so there isn't a great deal he can do, but lets put this into perspective and look at the loss to Steven - its $24,000 NZD, not a bad days work for Dominik Bahn, but gut wrenching for Steven.

We have a lot more people that we have spoken to that wish to just put this behind them and put it down to a bad experience or a bum deal; like Koala Furniture in Australia who was scammed for Porsche 997 GT3R parts that Carbostuff doesn't have or doesn't produce; Frank at Modena Engineering in Australia who was scammed for BMW Z4 GT3 parts, Carbostuff doesn't have and doesn't produce.

With a quick calculation of what we do know of the sheer value of money that has been scammed by Carbostuff Engineering and its despicable owner, Dominik Bahn, is the best part of €200,000 Euro. He has personally pocketed from scamming people that have sent him money and continue to do; we need to act, and we need to act now.

We recently did a post on our social media Instagram and Facebook pages after hearing from the latest victims but also to raise awareness. Our good friend, Anthony Gaylard, reposted our post and was sent a direct message by Carbostuff Engineering owner, Dominik Bahn, telling him that he would supply Anthony the parts he had paid for back in 2015. When Anthony just requested a refund in full, his direct message was deleted and he was blocked, see below. 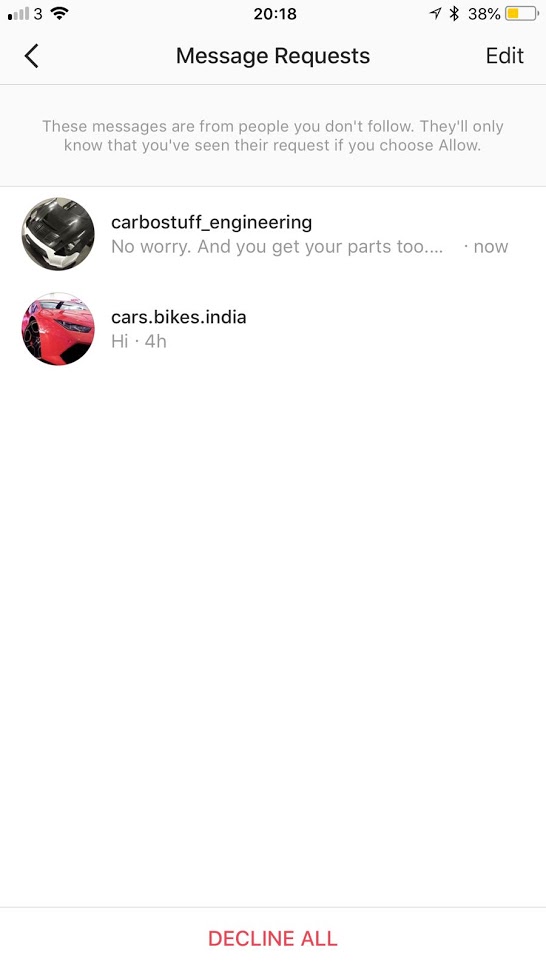 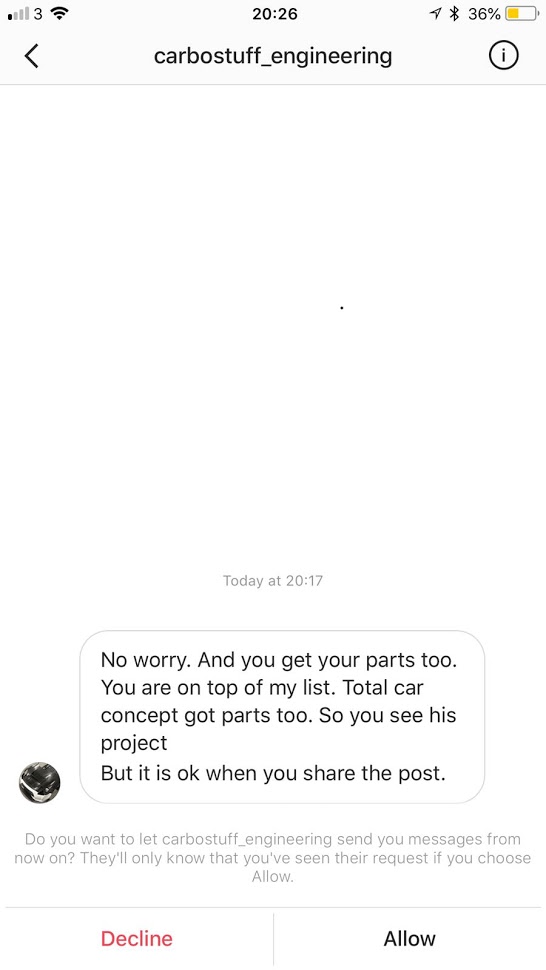 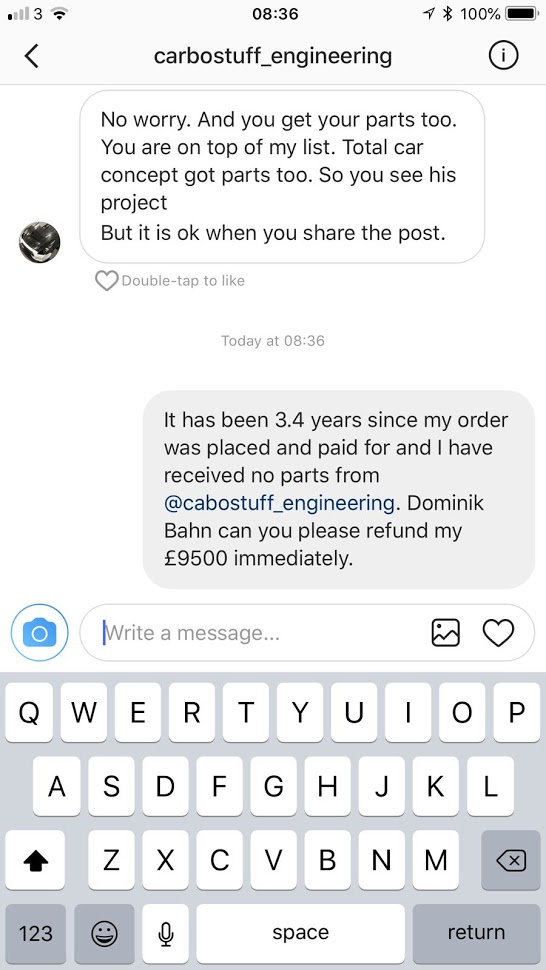 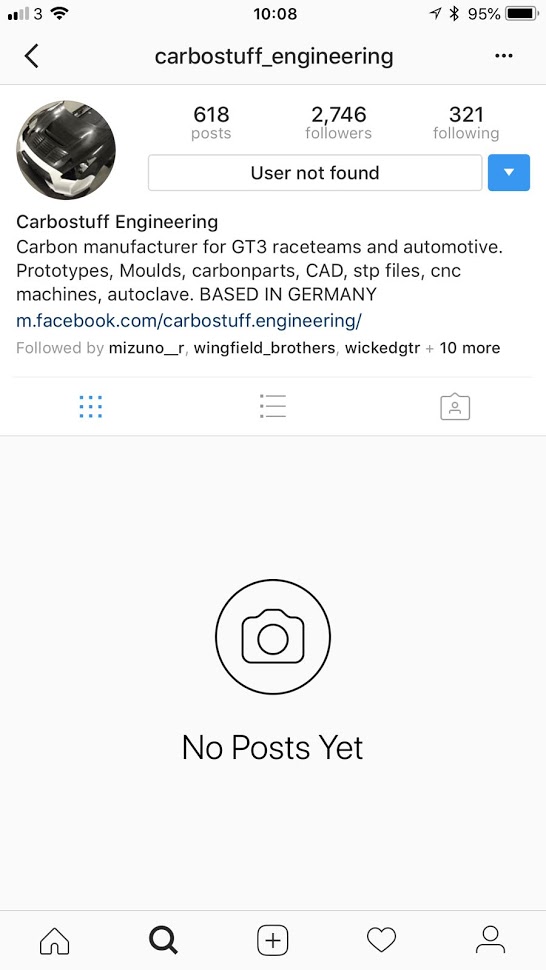 Our aim is again to speak with Interpol again, get back in touch with the German Police and liaise with our German Lawyer – hopefully, collectively with our information, we should be able to build a decent case and at a cost everyone will be happy with. The more people we have that want to fight for a return of cash, the better. We have been pushing for various months now for them to act and we are now getting somewhere.

Get in touch with us today if you have been affected by Dominik Bahn and his despicable company, Carbostuff Engineering by contacting us at Info@vaddesign.com